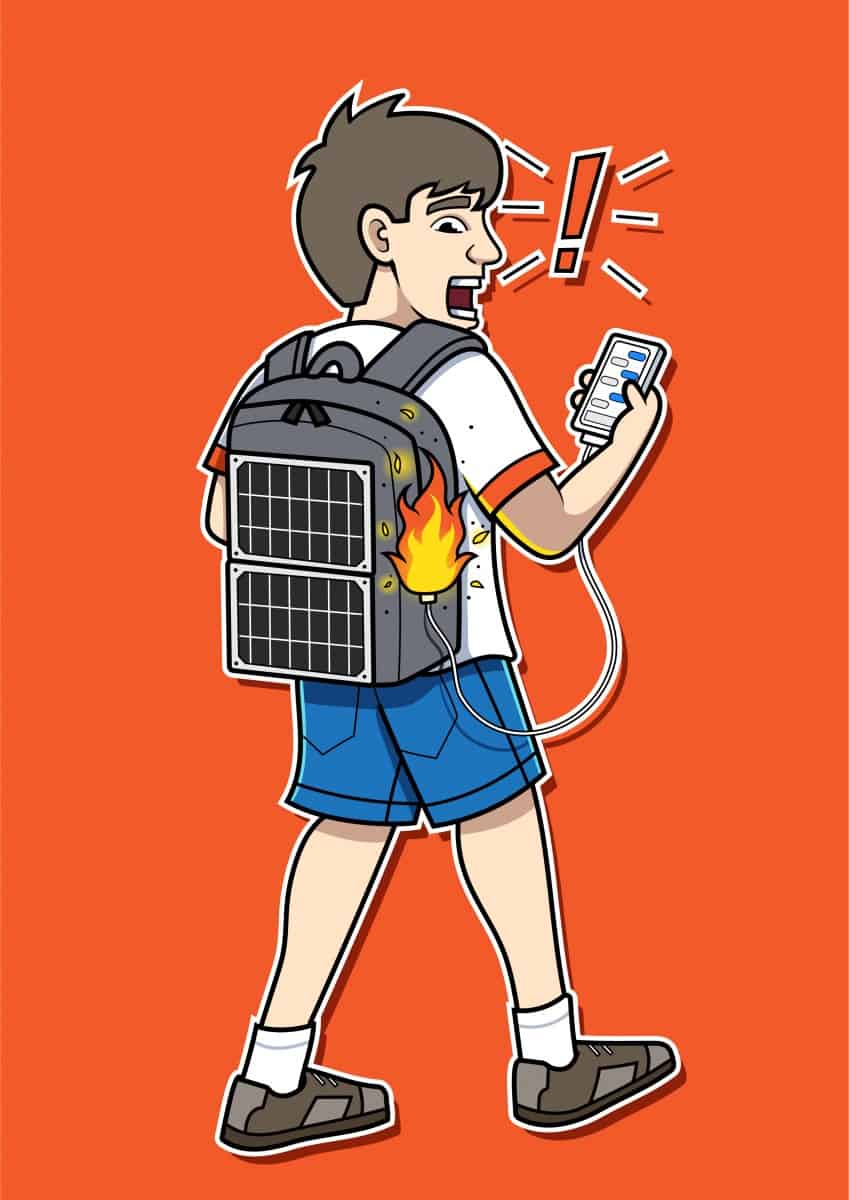 Solar backpacks have become an incredibly popular piece of gear. Whether students on a university campus, an entrepreneur constantly on the move, or someone who has to work (or chooses to play) in some remote areas far away from any wall charger, solar backpacks have been a popular solution

The chances of a solar backpack catching fire when it is modern, properly used, and not abused in extreme temperatures is next to nil.

However, it is important to understand what those long-shot potential risks are and what the early warning signs are in the off chance that something might go wrong.

How Can Solar Packs Be Dangerous?

Generally solar backpacks are going to be very safe pieces of gear. After all, there are plenty of regulations in place to make sure people don’t walk around with a firebomb waiting to happen on the back. Bad for business, and sure as heck bad for any company.

This isn’t a new technology anymore. Although solar backpacks are definitely more popular than they ever have been before, they have been commercially sold since the mid 2000’s.

There’s been plenty of time to test them in a wide variety of conditions, and plenty of corporations that require teams in isolated areas, as well as the U.S. military, now use solar packs as a way to keep gear charged and communications up even during the most challenging of circumstances.

The one potential issue is when there is a failure in the battery. When this happens the cause is often because of poor design in the circuits that allow a cascade effect to take place in the wrong circumstances.

This can also occur from the stress that occurs from extended stress that takes place in a non-optimal environment.

Practices that increase the chances of dangerous failure:

If you make sure to never do any of these poor practices then chances are very very small that anything will ever go wrong.

If you want more detail on these potential issues, check out our article on: Can Solar Backpacks Catch on Fire?

Solar Backpacks: What Are the Chances of Something Going Wrong?

Numbers are limited but it’s safe to say they are tiny. Let’s take that 200 number and even shorten the time frame to 10 years to make the odds even worse. This might also pick up or account for a report or two that slipped through the cracks at some point.

We’ll also say there are 2 million solar backpacks being used every day. That number is laughably low, but once again, we’re trying to rig this to show the worst case danger scenario, so just go with it.

There are 2 instances per month of a solar pack having a fire, which is pretty much the only danger.

What number is that?

To give you an idea, if there were only 1 million uses, that would be a .000002% chance of something going wrong. So 2 million would be twice as unlikely. Repeat 60 times.

In other words, your chances of being killed (not even hit, but killed) by lightning in the united states is OVER double the chances of a solar backpack failure, which doesn’t technically guarantee injury.

Those numbers really put it in perspective, don’t they?

Yeah avoiding the on fire solar backpack: not nearly as hard as most people think it is.

There are some questions that tend to come up repeatedly when talking about solar backpacks and whether they’re safe or not. Read on for the answers to all these solar pack safety questions.

Do solar backpacks catch on fire?

There are approximately 200 confirmed cases of a solar pack catching fire from 2007 through 2020, or just a tad over 15 a year. While the exact data is limited it seems these happened more often around 2007 than 2020, often happened in extreme conditions like the charger being left locked in a car during a 120 degree day, and from packs manufactured from a non-industry standard name..

The chances of a solar backpack from a major company catching fire, especially when properly used and cared for, is incredibly slim.

Less than 1 in a million when you consider millions of these packs are used every single day just across the United States, much less the world.

Although not around portable products, this great article explains how fires from batteries in solar systems take place and the chemistry/concepts are the same.

Solar backpack batteries do not leak acid. They are designed differently than other batteries, so this is not a valid concern when it comes to solar pack safety.

Solar backpack batteries can get very hot, especially if being used to charge items in hot weather. While they will not overheat and “blow a fuse,” it’s important not to abuse their use in extreme temperatures over extended periods of time.

By making sure to get some shade or not continue charging laptop and phone when those electronics are already charged while hiking in the blazing sun while help further reduce the already very small chances of anything going wrong.

Solar backpacks are not dangerous when properly manufactured. With DIY solar backpacks, the answer is “It depends.” Commercial solar packs are designed by engineers, use quality controlled materials, and are designed not to store energy, thus minimizing potential issues. DIY packs don’t have those safeguards.

Are there people capable of making quality DIY solar packs that work great? Absolutely. After all if they couldn’t be made safely, they certainly could not be mass produced for sale.

However, this is not your conventional DIY project that anyone with minimal experience and the ability to use YouTube can pull off.

Keep in mind that the question of whether or not a solar backpack is dangerous changes when it goes from commercial made and regulated to DIY options.

This would be a potential issue, which is why most solar backpacks aren’t designed with a large storage battery. They are designed to charge when something is plugged in. That way there isn’t a large full battery of energy on your back not doing anything.

It’s safe to say that your average solar backpack from a reputable company is already plenty safe. Even more so when coming from a premium brand that has even stricter quality control.

If you’re not on a budget and simply looking for the safest, best looking, and best functioning solar backpack on the market, we haven’t found anything that’s come close to competing with the Voltaic Systems solar backpack.

Good for charging laptops, phones, any electronics while on the move, it’s also fully functional as a decent sized pack.

It looks good, feels good, and we were extremely happy with its performance while testing it out and about for a few days. If you have the money, there’s no question that this pack is definitely worth the buy.

That said, there are decent budget-friendly solar backpack options that are still:

That’s what we’re looking for with any solar backpack no mater what the price point and while there are several options on the budget end, the Lifepod Backpack with solar panel edges out some of the others by a nose.

These tend to come in for under $75 which puts them in a much more affordable space than premium packs that tend to be several hundred dollars each.

You can click on the picture or right here for up to date pricing on Amazon.

There are other decent options but these are the two ends of solar backpacks that we recommend for quality and safety.

While there is a very outside chance of there being problems with a solar backpack, especially poorly designed and constructed ones that aren’t properly taken care of, people who take proper care of their solar packs and make sure to only buy quality made packs should have no problems.

While there are possible exceptions, the chance of something going wrong is literally 1 in many millions.

In other words, solar backpacks are much, much safer than things people take for granted every day like aspirin, pets, or walking down some steps.

As long as you’re smart about it, you should be able to buy and use a solar backpack with confidence knowing you are almost certainly safe.

Other Articles You May Find Helpful…