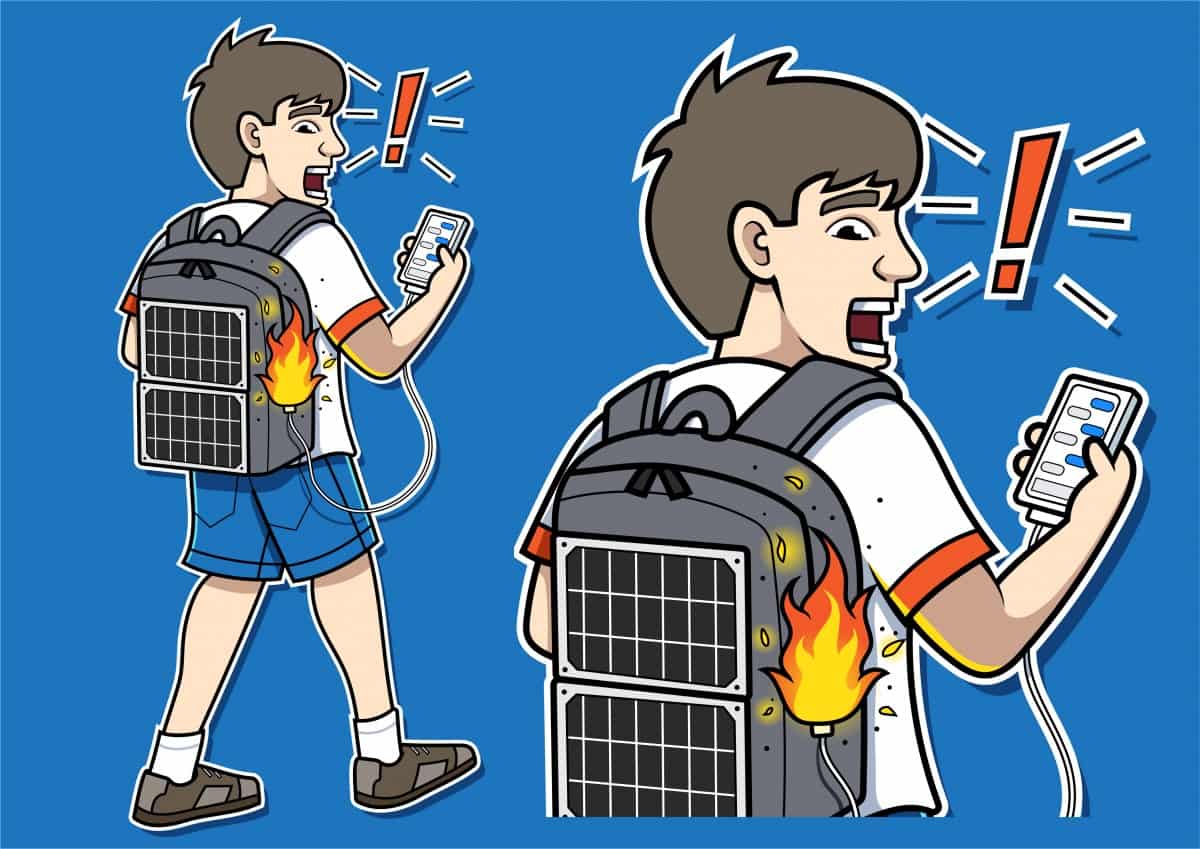 Solar backpacks are an excellent product that have made life easier for many people whether students, travel bloggers, freelancers, digital nomads, and others. The ability to charge a phone, an MP3 player, or even a laptop while away from an outlet is definitely convenient. If not outright necessary for some.

But is it safe?

Every so often a news report comes on with reports of a fire, scaring many people off from solar. But is this a common occurrence or is there something else behind the battery failures? Can a solar backpack catch fire?

But unlikely doesn’t mean impossible. So based on the limited safety studies that have been done, what can we learn about these instances? How are you supposed to know if solar backpacks are truly safe or not?

One of the biggest misconceptions out there is how solar backpacks can catch on fire. Understanding where the failure takes place allows you to know what signs to look for and what to actually worry about. Putting shade over a solar panel doesn’t make a pack safer – just less effective!

Fires from solar backpacks NEVER happen because the solar panel “heats up too much” and gets too hot. That’s not a thing.

During one of those rare occurrences where a solar backpack fire does actually take place, it happens because the battery has a catastrophic failure. That is the part of the solar setup that fails.

Lithium ion batteries used for power banks (often referred to shorthand as Li batteries) are where the failure takes place. If these overheat for an extended period of time, are abused or used incorrectly, then they can explode.

These batteries are often used in solar battery packs, as well as other non-solar portable power packs that can have the same issues when used and abused incorrectly.

So throw away any stories claiming the solar panels “overheated” causing melting or flames in the backpack. That’s not a thing with solar backpacks and shows a clear lack of knowledge about how the solar power process actually works. In the extremely rare instances where an issue like fire occurs, the power bank is where you need to look.

Why Do Solar Backpacks Catch Fire?

One thing that’s important to note right off the bat is that fires from exploding batteries or power packs in solar backpacks are incredibly rare. Based on sales numbers from 2015-2019 there are over 2.9 million solar backpacks in use in the United States alone.

Not including the solar packs that were approved by the U.S. Army for military use, those that are on the shelves of stores unsold, the backpacks sole in the decade before that, or those millions that have been bought in the past couple years.

Despite this there have only been 200 known cases of fire from power bank failure, and that number is from eight years. That means saying there’s a .00000001% chance of an issue is actually far too high. The actual real life failure rate is much lower and usually has some clear causes.

Cause #1: Improper Storage of Power Bank in Extreme Heat

When power banks are in those conditions the extreme heat can cause a reaction in the battery which then causes combustion. In extreme cases that is what causes fires after a catastrophic failure.

If you want to see how gnarly the damage is that one of these can do to a car when left unattended, take a look at the pictures here that show that aftermath of one such situation.

There’s a reason you shouldn’t go for cheap no name brand batteries. Solar batteries and power banks need to be designed a specific way and to put it bluntly: some companies and countries care more about quality than others. If you see a no-brand incredibly cheap deal for a power bank from east Asia, pass for one from an actual established company.

These are not the kinds of products you want to buy from a dropshipper. Bad battery quality means failure is more likely to happen at even the mildest of stress.

Cause #3: Long Exposure to Harsh or Unreasonable Conditions

This includes extreme heat, but it also includes extreme cold, non-stop rain/downpour, basically if it’s the type of weather conditions where you look at it and say “That isn’t a good idea,” then it’s probably too much. This actually takes some degree of effort in most cases because the power bank should be in the solar pack itself, keeping it from direct heat or cold.

Meaning it takes even more heat or cold in extreme conditions to cause this level of failure, assuming the circuits and construction are solid.

Extended exposure to these types of conditions are very bad for the power sources of solar backpacks, and increase the chance of failure.

Cause #4: Poor Circuit Design or Build

This is more common in either the very old packs that were early models, or in very cheaply put together models in areas that have, let’s call it less than ideal supervision.

The way that the L-ion batteries work in solar power packs involve keeping apart materials that don’t play nicely together. This is why good design and circuitry is crucial to keeping everything where it belongs.

Not only is a bad enough design or build enough to be a fire hazard, but circuit issues can also make the portable battery more susceptible to the other issues on this list that can lead to major failures.

How to Prevent Solar Backpack Fires

Preventing a solar backpack fire is relatively easy in most cases. Since the chances of that level of a catastrophic failure taking place is so small anyway, a few minor precautions can make all the extra difference to make sure you don’t end up having any issues.

Prevention means looking at the common causes and stepping to get ahead of them.

There are premium solar backpacks that run the $250-400 range and are out of the budget of many of us. Though they are amazing packs, the good news is that there are plenty of reliable brands for under $100 that are more than good enough for most of us.

There are multiple great inexpensive solar backpack options from brands like ECEEN that have packs in the $50-80 range. So there’s no reason/excuse to go for a really cheaply and questionably made $25 or $30 pack.

That is just asking for trouble.

Only buy reliable brands. That way you know that the quality of the battery and the power pack are up to snuff.

Use Common Sense in Extreme Weather

If you carry a laptop in a backpack through Fairbanks Alaska in winter at -40, you wouldn’t plug the computer in as soon as you were indoors. You would take time to let everything warm up a bit more naturally before taking a chance.

Same way if you had to take a computer some idiot exposed to a hot car in summer for hours you’d let it sit indoors in the AC before powering it up.

Use that type of common sense and you are going to be much less likely to have any issues with your solar backpack.

There have been relatively few studies done specifically on the safety of solar backpacks and that can be frustrating. However, based on the reported numbers that we have, the studies that have been done, and the sheer amount of solar backpack users out there give us some pretty good ideas about the overall situation.

The overwhelmingly majority of the time solar backpacks are going to be perfectly safe and a great way to charge electronics on the go. Don’t cheap out on the battery, don’t trust very old and poorly made solar backpacks, and at the first signs of trouble check that warranty and get a reliable replacement.

As long as you follow those steps chances are the solar backpack will never be a hinderance but just a fantastic tool that aids you wherever your daily travels may take you.

You May Find These Articles Useful…