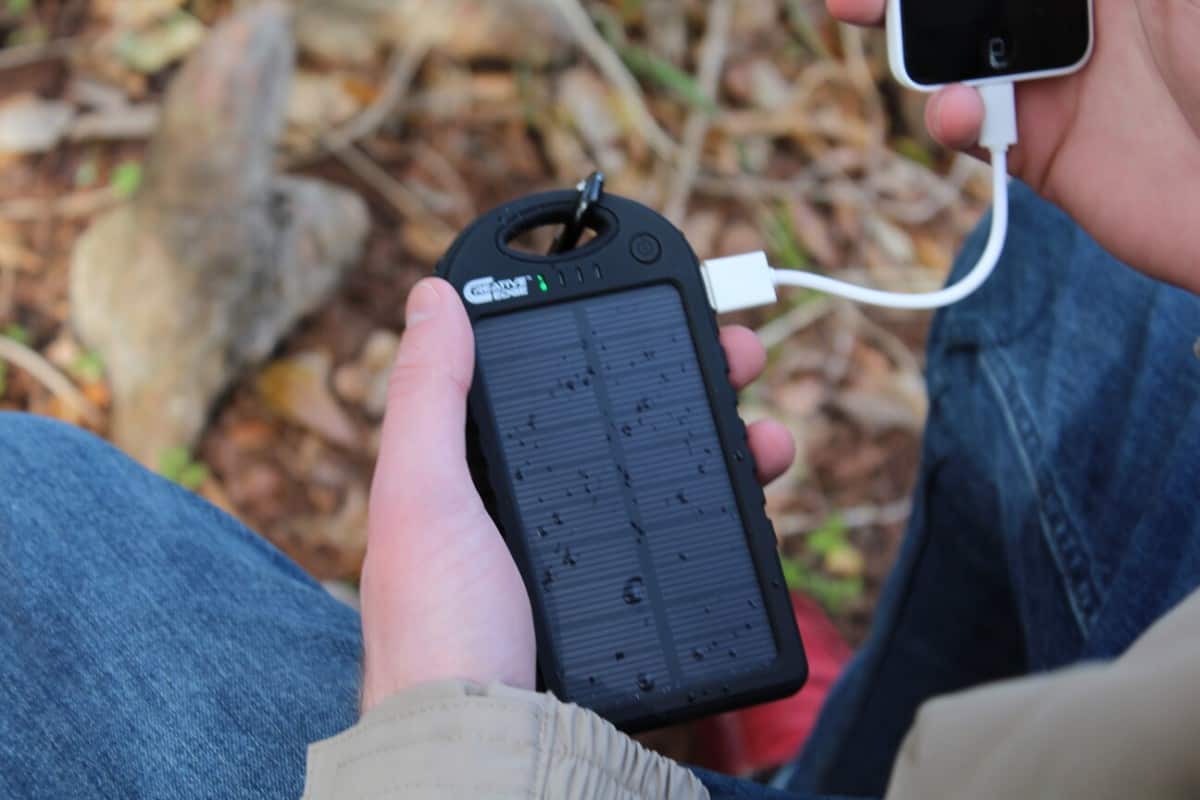 Solar power has come a long way, but is it always the best option or has it hit that trendy point where sometimes it’s more about being hip than actually being effective? These questions make sense. Are solar power banks worth it? Are they not?

Solar power banks are worth it if your main focus is convenience and ability to charge electronics location independent from a conventional power source. If you only care about money savings then in most cases solar power banks won’t be a major money-saving investment.

Let’s break down the numbers of how this work.

Since we’re focusing on economics and savings vs. cost let’s dive into how much a solar power bank could potentially save you.

For many people one of the main points of a solar power bank is charging electronics away from home. These hours do NOT count as money savings since you wouldn’t spend money hiking in the woods without a solar bank – you just wouldn’t have an active phone or laptop.

So you have to buy a solar power bank, so let’s not forget to add that in. After all, you need to make your investment back before any lowering in your electric bill actually counts as savings.

Cost of a Solar Power Bank

The good news is that the cost of even a really good solar charger isn’t bad at all.

How Did You Come Up With This Number?

I scoured Amazon and multiple other outdoor websites to see what five solar power banks had the most reviews. Because that indicated which ones were selling the most units.

So while it is possible to get cheaper solar power banks, as well as spend more on a premium option, the $42.50 is the average price we’ll use. Adjust the timeline for savings according to how much you actually spend.

So we’re at -$42.50 plus whatever taxes or shipping are there, if they apply. Since this varies so much we’ll just ignore those for now.

This all starts with understanding how much your laptop, tablet, and smartphone are costing you in utilities a year.

This can be rough because for a freelancer working at home they may have their laptop plugged in 24 hours a day actively charging as they work.

For others 6 hours seems like a lot to have a laptop plugged in.

So we’ll give some averages and you can do the mental math to adjust according to what your bill says your cost per Kwh is.

Cell phones can vary but tend to use 2 to 6 watts when charging. Not much at all. But phones aren’t plugged in charging all day for most people.

Though the charger is. Important to keep in mind, most people keep their phone charger plugged in 24/7.

In fact when you look at the total Kwh cost for charging a phone for an entire year it is generally less than $1 or right around $1 if you’re around the national average.

We’ll run in more exact numbers in the next section.

No one should be surprised these take a bit more energy to charge. It is worth noting that a heavy duty gaming desktop will take a lot more energy than a light work laptop.

We’re using the most common setup: a middle of the road laptop. Not optimized for energy use, not decked out for serious online gaming.

We’re going to put it down as 4 hours a day charging. This is when it’s actively charging, and isn’t how often you use your computer, but a rough estimate of how much it uses when purely charging versus what it is using naturally while in use.

This number, for accurate financial estimates, should be way lower than the number of hours you actually use your laptop.

Think of charging hours vs. use hours this way: unplug your laptop. You have 3-6 hours to type. Plug in to charge. 45-60 minutes later it’s almost certainly at 100%. Repeat. For 9-18 hours of work you only needed 3 hours of actual charging time. That’s how the cash estimates work here.

The average laptop generally uses 60 watts as a general average although numbers vary from 20 to 60 (mostly based on screen size).

This can lead to actual cash costs over the course of a year of charging.

Electric rates vary IMMENSELY based on location. So while a solar power bank might seem laughable for a state with the lowest average energy cost in the United States (Washington state as of this writing) a state whose electricity is 2x or 3x the cost could make even modest savings become much more appealing.

Keep in mind averages are just that. Many states have different rates depending on the season (summer or winter) so the savings can wax or wane during the year.

So what do these average numbers add up to over a year? Here’s the cheapest state, national average, expensive state, and Hawaii the most expensive outlier.

Important Consideration: If you’re running a laptop 12 hours a day, chances are your solar power bank isn’t going to be able to be your permanent power source, even if you have it charging by a window as you type.

For this reason the practical real life savings and use times even if you do only use your solar power bank at home are likely slightly lower than these numbers.

Unless you buy two and rotate them. In which case never mind.

Now if you want a more in-depth and excellent tool to measure your expected power usage so you have numbers to compare, take a look at this energy calculator to do just that. It’s an easy to use and outstanding tool for making sure you can get the estimates you need to make an informed decision.

How much Would a Solar Power Bank Save Over 5 Years?

Based on the numbers above we can take a pretty good estimate of how much a solar power bank could save you and then you could use those numbers to make an informed decision on whether it’s worth it or not.

Make sure to adjust the numbers for your average usage before multiplying. And then subtract $43.50 for the original purpose.

But based on the averages above:

How Much Would a Solar Power Bank Save Over 10 Years?

Using the same numbers and averages as above:

It is worth noting at this point that there’s virtually no chance electricity prices didn’t go up each of the last 10 years, meaning the savings could actually be higher as the cost numbers for kwh creeped up.

A good tool for looking at these adjustments can be found HERE.

Is a Solar Power Bank Worth It?

All the numbers are up there. Is it worth the hassle to set up your home electronics to do this? Do you have lots of cloudy days or long winters that could dampen these savings numbers slightly?

How does your state costs affect you? What looks like an idiotic buy (for pure money reasons anyway) in a power cheap state like Washington makes way more sense in Hawaii or Connecticut.

Then again, is ALL this hassle worth it for that little money?

For 99.9% of the population almost certainly not.

BUT that doesn’t mean a solar power bank isn’t a good buy. It just doesn’t stand on its own from a pure money savings/budget perspective.

In a cheap power space it would take 5 years on average to just make the purchase price back though in a power expensive state it can be done in about 2.

However, the ability to work remotely, to power your electronics when hiking, camping, or traveling, the freedom of movement and being able to open up new opportunities is what makes a solar power bank shine.

There’s a reason there weren’t many videos of PCT hikes 15 years ago. They’re everywhere (and awesome) on YouTube now.

So minimal savings is a nice little benefit if you can justify a solar power bank for your traveling, remote work, or freedom of movement lifestyle.

If not, then you’re better off just calling it a treat for yourself versus trying to make the finances work.

We’re still currently testing individual power banks to see if there is a discernable difference between any of the top 5 or 6. Portable solar power banks have been around for a while and the good news is that there are many good options.

While I don’t have one premium recommendation yet, the following three are all outstanding choices (links go to Amazon.com)

Solar power banks can be an incredible tool. That said, when measuring their worth there’s a big difference between how useful this is for someone saving money versus the freedom to travel, visit, or camp in isolated areas while still staying connected.

If you’re a travel blogger, creating a local YouTube channel, or need to get out but also need to keep typing articles during the weekend, then the value of a solar bank is obvious. But not monetary.

That’s all you need to know to make your decision on whether or not to buy a solar power pack.