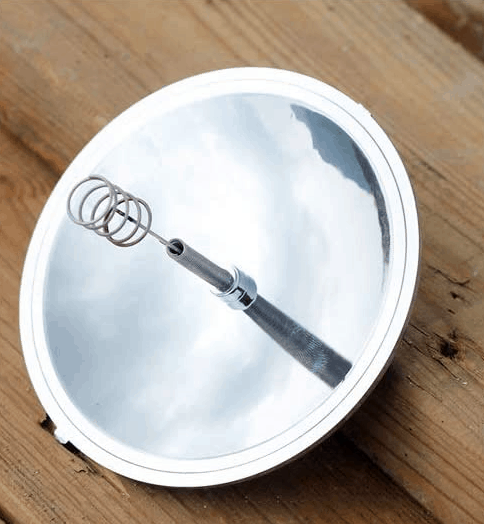 There are two general designs for these. The picture above is my favorite, because being able to put a small bundle of kindle into the perfect position to light is definitely helpful.

What Is the Best Solar Fire Starter Right Now?

As of the writing of this I’d say the Comidox 2-pair is the best quality and best value for the money. Because these are inexpensive to make and design, getting two for a price slightly under what most others would cost as a pair, and the fact you get a pair of them together, is solid.

The parabolic fire starter is made by many different companies, and it can be hard to figure out full ratings across multiple websites.

But generally speaking Comidox not only offers a pair, but they also have a higher percentage of positive ratings than the competition.

So that’s good enough for me. They use the proper materials, have the proper reflection, and I personally prefer the solar lighters that have the attachment to focus on kindling instead of having to free hand it or deflect the light down into a fire pit.

Check Amazon.com for up to date pricing on this pair of top rated solar lighters!

How Do Solar Fire Starters Work?

The good news is that solar powered fire starters are very easy to use. In fact, some people think they are among the easiest ones to use. They are also the most weather dependent, so keep that in mind.

However the concept is really simple. The point or spring, depending on design (I find spring holders for parabolic solar lighters to be better, but it’s a preference thing at that point), holds the tinder in the middle of the cup.

That cup is the reflective dish made of a very shiny stainless steel that heats up and reflects the sun’s rays into the tinder. This is the same concept as the magnifying glass method for starting a fire without matches.

However, the tool helps to heat up the sun’s rays and concentrated them into a hotter small area.

This makes for an easier, more efficient, and often more effective way of lighting up the tinder so it would catch and burn.

Basically the heat of sunlight is drastically increased and then beamed into a small area with flammable material.

The biggest issue isn’t brand, it’s simply making sure you have a solar fire starter that is properly made, designed, and polished. Because the design is so simple the truth is that you have a lot of inexpensive options.

If you’re not interested in grabbing the Comidox 2-pack, or if they go the way of many other manufacturers and decide the profit margins aren’t enough to keep producing, then a good bet is to go with the MM Survival Solar Light.

They are solidly designed, consistently produced, and while many companies producing solar lighters come and go MM is pretty much always around.

They have been creating, producing, and building lightweight functional solar powered lighters for six years and counting at this point.

The picture below shows a good example, as well as how to set in the kindling to get it lit so you can take that over to the fire for a full light.

That picture is linked to the most recent price for these solar lighters as found on Amazon.

There really is no reason to look at the other options than the two here. They are the best solar kindling lighters available. Others are just poor copies, at best.

Are these the same as solar cigarette lighers?

Yes, they are. There is no different design. The pictures of cigarettes in these was more designed to have an easily burnable thing that was easy to recognize to show the concept was good. However plenty of smokers who are outdoors a lot have these on hand to light their cigarettes.

How you use them is up to you.

What is the best solar lighter brand?

The best solar lighter brand right now is Comidox while the most consistent is MM. Either one is a reliable option, and considering both are usually under $10 no matter where you buy them – they’re a pretty good deal.

Is a solar lighter one of the best fire starter options for survival?

No. As much as I like them you’re relying on bright sunlight in order to make use of them. If you’re stuck in a deep canyon, in heavy woods, in rainy weather, it doesn’t do you any good.

Would I recommend one in a bugout bag as an emergency option with whatever other fire starters you choose to carry? Absolutely.

Is a solar lighter igniter something different?

No. This is just a different way of saying solar lighter or parabolic lighter. Or solar fire starter and parabolic fire starter. They’re the same outdoor tool.

Saying there’s a single big name in solar fire starters is going to be sort of disingenuous. Simply put, there is always someone willing to design and sell these. And they are AWESOME fire starters in sunny weather.

However the profit margins are so low that there’s no one big dropshipper or company that is going to commit to them. How do you improve on a very simple, inexpensive, but effective design?

You don’t and that’s why this is one of the few solar products that won’t have a large number of providers. No batteries, wires, or connectors needed. This is pretty simple survival gear that shouldn’t be your main go-to but it’s on my short list when I’m going through desert or dryland climates.

And it’s so small and light there’s another one for an emergency hiking kit and bugout bag. No reason for there not to be.

So that’s it. That’s all you need to know about the best solar lighters!

Other Articles You May Enjoy: